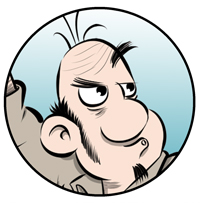 Fede works in a assembly line of a multinational company, after the last reorganisation seems that he maintaint the job. His sentimental life was a disaster. We don t know anything about his ex couples, we only know that he lives alone with his two sons, of two different relationships. 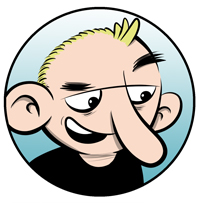 Pol is, thecnically, the half-broder of Andrea. In effect, the litle broder. All the life he has live with she. He don t miss a trick to Andrea. He don t understand why sometimes they treat she different. He know that she knows this, she feels this and she use this. He don t tolerate this. 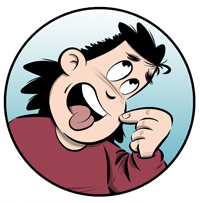 Andrea is the main character. Is a girl who has Down syndrome. She looks the world from a different point of view. Surely the correct. I don t know if she is fully aware of what happens to herself, but i can confirm definitely that she is happy. In fact, i don t think that she can understand the life with sadness, worries and unsolvables problems. She looks persons like that arround, extrange persons, persons that should not be well, different persons.

How start all this…
Far time ago i drawn one cartoon of my sister. I saved the cartoon in one of my folders until one o one day it ocurred to me that there will be a good idea do a comicbook character with Down syndrome. But that this trait was one trait more, like to be blue, to be flexibe, to be the capability to dress up of whatever or to fly. I wanted to do my part for the presence of persons with Down syndrome in the society. I published the first strip of Andrea on 2010 i think… The current Andrea don’t have nothing to do with this Andrea. I hope to be able to evolve him too man years more. You can read all the Andrea’s strips at the old web (in spanish).